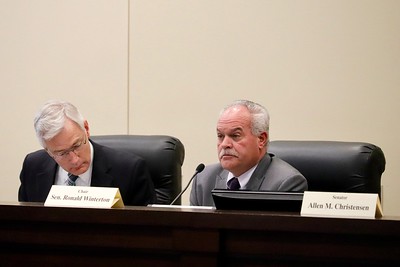 What a week! It’s hard to believe we officially finished the first week of the 2019 Legislative Session. It’s important to me to keep you updated about my legislation and efforts. I am continually grateful for the opportunity to represent you, and I am excited to share what I have been working towards this week.

State of the Judiciary

Every year, the Utah Supreme Court visits the Senate to share the State of the Judiciary on the opening day of the Legislative Session. Utah Chief Justice Matthew Durrant told legislators funding is currently an issue, considering Utah’s growing population. The court estimates that the 3rd District Court alone needs seven new judges but are requesting funding for only four. Durrant also pointed out attracting high-caliber judges is crucial and asked for increases in salaries for both judges and staff.

Durrant also touted the creation of a new legal profession in Utah, the Licensed Paralegal Practitioner or LPP. These legal professionals aren’t quite lawyers but will have more training than a paralegal. They will potentially be a more affordable option for people who cannot otherwise afford legal representation in limited legal circumstances.

Passing a balanced budget is the most important thing we do each session. Our Constitution requires the legislature pass a balanced budget before the end of the session. To prevent a government shutdown, we pass base budgets in the first couple weeks so our primary funding needs can be guaranteed. There are eight appropriation subcommittees that meet the first couple weeks of session to consider the most important funding items for their base budgets and additional specific funding requests. The subcommittees then prioritize their budgets and present to the Executive Appropriations Committee.

As you have likely read in the news, our state revenue is exceptionally strong this year. However, the funding source for our revenue is unreliable, which makes it difficult to plan sustainably for the future. In order to stabilize the funding source, we are again looking at meaningful tax reform. The guiding principle for this reform is to broaden the base and lower the rate. This would prevent the need to increase taxes while keeping the revenue consistent and reliable.

Medicaid is an ongoing issue in the legislature, and its substantial impact on Utah’s budget requires we address it every year. In November, Utahns signified that they wanted full Medicaid expansion and are willing to increase the sales tax to help pay for it. Senate bill  SB 96, Medicaid Expansion Adjustments, is intended to strengthen the expansion program passed by voters in a fiscally, financially responsible way.

As previously stated, the Legislature is constitutionally mandated to balance the state’s budget annually. Though the voters approved a sales tax increase of 3.2 percent, it will not be enough to cover the cost for full Medicaid expansion. The Governor’s Office of Management and Budget projects Utah Decides Healthcare Act of 2018 [CG1] will be short more than $10 million in 2021 and nearly $65 million by 2024. This bill implements financial safeguards that will allow us to balance the budget and provide healthcare for Utah’s most vulnerable populations. SB 96 passed through committee and is up for its second reading on the Senate floor.

If we are going to improve the health of our communities, we need to work upstream not only on prevention but better chronic disease management to keep people healthier. This means looking beyond simply who is sick and healthy right now, but also considering social determinants of health like access to food, housing and transportation. SB 83, Partnerships for Healthy Communities, seeks to create grant-based community programs allowing participating communities to coordinate efforts, track progress, collect data and implement a plan to improve the health outcomes of newborns to children six years old. This bill was presented in the Senate Health and Human Services Standing Committee and received a favorable vote.

Affordable housing amendments originate in the Commission on Housing Affordability, a four-year group made up of business leaders, homebuilders, the Olene Walker housing loan fund and various housing advocates. The commission’s overall purpose is to bring additional affordable housing options to Utah, which starts by providing planning tools for cities and municipalities as part of the moderate-income housing plan.

SB 34, Affordable Housing Modifications, specifies if cities and municipalities comply with two or more strategies such as Accessory Dwelling Units (ADU’s) and plans for future housing, then they can become eligible for a Transit Transportation Investment Fund (TTIF), money tied to housing and transportation actions. Other strategies include reduce regulation on ADU’s, eliminate and reduce parking requirements for residential development where residents are less likely to use vehicles, etc.

This bill was presented on Jan. 31 in the Senate Economic Development and Workforce Services Committee and received a favorable vote.