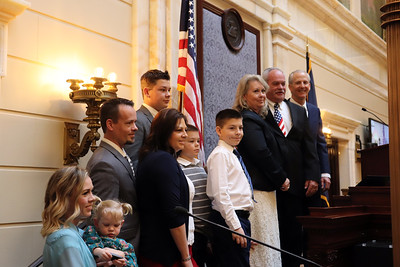 Ron is a lifelong resident of Roosevelt, Utah.  He raised his family in the Uintah Basin and four of his five children are now raising their families there.  Ron owned and operated Winterton Transportation for over 25 years. While serving farmers and hauling livestock throughout Utah, Ron learned how critical good roads and infrastructure are to our communities. Ron joined his father and brothers starting Basin Wholesale West, a wholesale grocery company, that has grown to serve northeast Utah and northwest Colorado.  Earning a living as a small business owner and truck driver, Ron knows first-hand the impact government has on business and free enterprise.  ​

In 2008 Ron was frustrated by county regulations and unresponsive leadership, so he decided to park the truck and enter politics.  That year he was elected as Duchesne County Commissioner and has served three terms. Ron now brings his experience and wisdom to the Utah State Senate as he represents Daggett, Duchesne, Summit, Wasatch and Uintah counties.

Ron is proud of his accomplishments as County Commissioner.  He is always available to residents and earned a reputation for hard-work and persistence, ensuring government is assisting citizens. Ron's experience and knowledge has earned him respect from leaders around the state and makes him an effective and powerful voice for Senate District 26. His integrity means that he does what is right, regardless of consequences to his political career.

Ron is married to his sweetheart Lori Jo, and together they are the parents of five children and the proud grandparents to 13 grandchildren.  In his free time, Ron enjoys spending time with his family and traveling.