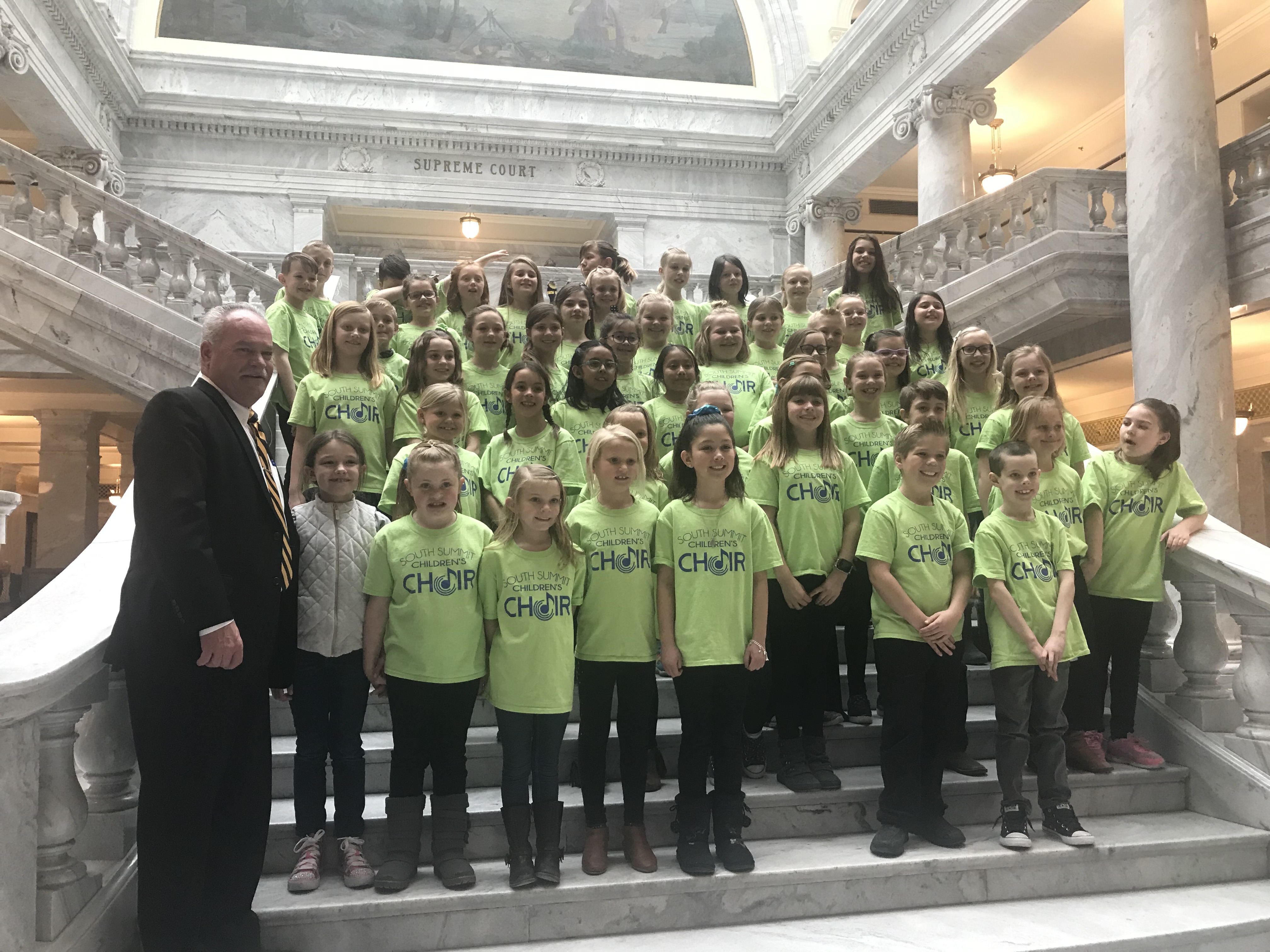 Last week we reached half-way point of the session. The next couple weeks are going to be long and busy but I am ready to see what else we accomplish in the Senate. Read about legislation and some highlights that occurred during week 4:

This week on the Senate floor we recognized the winners of the 2019 Senate Art Contest. We received submissions from 9-12th-grade students from all over the state. The top 22 submissions are currently on display in an exhibit in the Capitol. This year’s theme was INSPIRED Utah and we received art ranging from beautiful Utah landscapes to dedicated teachers in action. 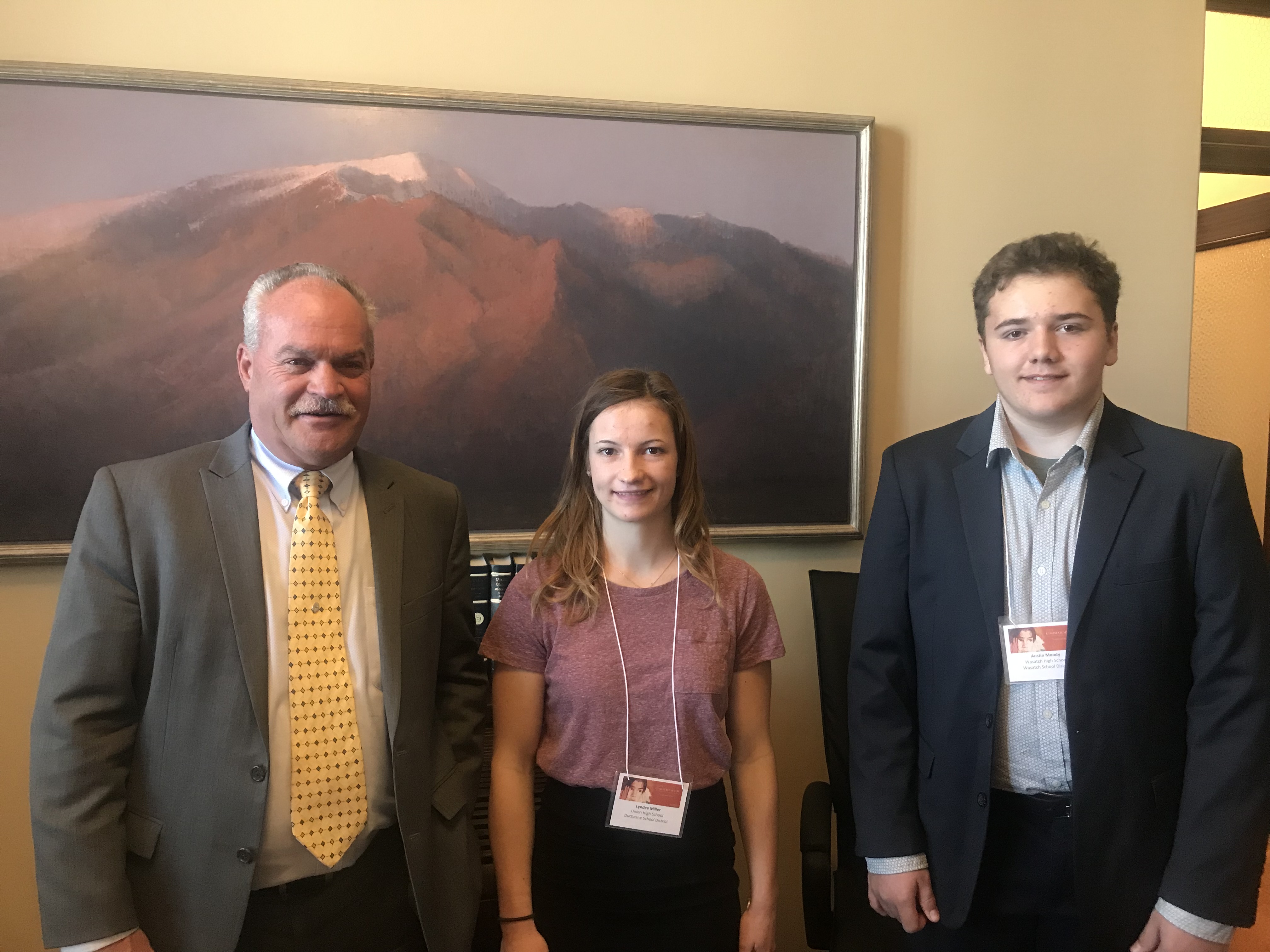 My district had two winners: Austin Moody from Wasatch High School and Lyndee Miller from Union High School. Congratulations! I am continually impressed by the talented students in our state.

In caucus this week, we welcomed Senator Mitt Romney, Congressman John Curtis, Congressman Chris Stewart and Congressman Ben McAdams. In previous years, the federal delegation would speak on the Senate floor, but by inviting them to caucus we are able to share concerns, ask questions and relay input we receive from our constituents. We will have Senator Lee and Congressman Bishop in future meetings this session. 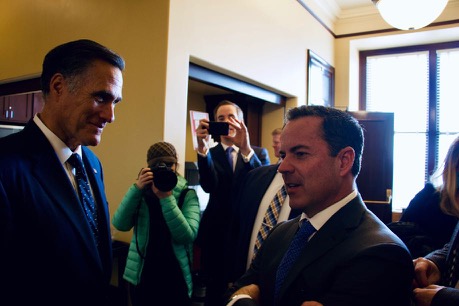 The legislature will need to determine how to best fund critical items including public education enrollment growth, increase in the weighted pupil unit, upgrade school facilities, transportation projects to accommodate a growing population and social service programs. When balancing Utah’s budget, the legislature must be fiscally responsible, base decisions on forecasted numbers and review previous budget cycles.

The way we decide how we’re going to fund these critical items is through appropriations subcommittees. This is where legislators submit requests detailing how much funding a piece of legislation or process will require. The final budget appropriations subcommittee meetings met this week, and committee chairs presented their priority budget lists to the Executive Appropriations Committee (EAC) chairs. The EAC will continue to meet to sort through the list and needs submitted by the committees. They will consider requests for appropriations that need funding and funding needed for bills. In the last week of session, the EAC chairs will run a bill that will balance the state’s budget.

You can listen to the EAC meetings here.

This week we considered a bill that would reinvent how we fund higher education building projects. Under the current system, schools only expect to receive funding for a building project every five years or so. It is an alternating process and schools tend to save their spot in line for larger, expensive projects. The state then ends up paying tens of millions of dollars for big, brand new buildings. Under SB 102, Higher Education Capital Facilities Amendments, money would be set aside each year into restricted accounts for all of our institutions within the Utah System of Higher Education (USHE) and the Utah System of Technical Colleges (UTECH). By setting money aside and divvying it up among all of the institutions, they would be able to better budget their funds and save up money for more cost-effective projects, like renovating an existing building. This bill passed the Senate and will now be considered in the House.

After one of the most expensive fire seasons our state has ever seen, it seems fitting to work on future funding needs to control fires in our state.  HB 135, Wildfire Preparedness Amendments, creates a Wildland Fire Fund to fund grants for local fire departments and those who assist with the suppression of wildfires. This bill would move money out of the existing Wildland Fire Suppression Fund to this new fund, so the money could be used create a system within local fire departments to do some work prior to the blaze of big fires. This bill passed on 2nd reading and will be debated once more in the Senate.

As technology improves, we frequently update the laws to reflect these new advancements. HB 167, Wildlife Documentation Amendments, brings hunting into the digital age. This bill creates an option for a digitized big game hunting tags. This does not eliminate the physical tags, it simply gives hunters another option between the electronic or paper tag. This bill passed on 2nd reading in the Senate and will be considered one more time on the floor.

In Utah, 80 percent of suicide deaths involve a firearm. Suicide is also the leading cause of death among our youth from ages 10-17, and in most cases, firearms tend to belong to another member of the family. The House Law Enforcement and Criminal Justice Committee heard HB 17, Firearm Violence and Suicide Prevention Amendments. This bill would restore a previous voluntary firearm safety program and a suicide prevention education course. The committee members agreed there is a risk in not properly storing firearms. By restoring this provision, it will hopefully encourage parents to talk to their youth about firearm safety. Most importantly, this bill will help train individuals on the responsibilities that come with owning a firearm and properly storing it. Gun advocates, educators and religious groups spoke in favor of this bill. HB 17 passed the committee with a favorable recommendation.

Hate crimes legislation is not new to the state of Utah. For the last few years, bills relating to hate crimes have been sponsored but for one reason or another failed to pass the Utah Legislature.

During the Senate Judiciary, Law Enforcement and Criminal Justice Committee on Thursday, the sponsor of SB 103, Victim Targeting Penalty Enhancements, pointed out the difficulty in successfully prosecuting hate crimes due to the current law’s lack of specified protected classes.

As recent local events have demonstrated, it is clear to many that some crimes are much larger than the injury caused to a single victim. Hate crimes are designed to create fear in an entire community of people, and current Utah law is not adequate to address these crimes. SB 103 proposes to define protected classes to better protect all Utah citizens. The bill passed out of committee and will now be considered on the Senate floor.

Across the country, we are seeing fewer and fewer family farms. As urban development encroaches on agricultural operations, clashes are inevitable. In some cases, groups with little legal standing bring lawsuits against farms and ranches in an attempt to disrupt the agricultural industry. SB 93, Agricultural Nuisance Amendments, aims to address nuisance lawsuits and seeks to establish parameters for lodging a complaint while also protecting the rights of nearby landowners who may be adversely affected by farms or ranches.

Utah is the 9th most urbanized state in the nation, so these clashes are bound to occur more frequently. Farms and ranches are not expanding into urban areas, housing developments are being built near established agricultural operations. This often forces residents to confront the realities of food production. Smells, flies, mud and manure are a part of everyday life for hard-working farmers. SB 93 passed in the Senate and will now be considered in the House.

Access video of the bill presentation on the Senate floor here.

In the News: Deseret News

In 2015, a conversation began in the legislature concerning the use of body cameras by law enforcement. In 2016, a compromise was created balancing the interests of law enforcement and the interests of the public. One delicate area that continues to be debated is the need for law enforcement officers to turn off their cameras in certain situations. SB 160, Body Camera Disclosure Amendments, removes the provision allowing an officer to deactivate a body-worn camera when consulting with a supervisor or another officer.

During the Senate Judiciary, Law Enforcement and Criminal Justice Committee on Tuesday, some members of law enforcement spoke in opposition to the legislation. They testified that this policy could affect a supervising officer’s ability to instruct inexperienced officers in the field. However, committee members felt the benefits of the bill outweighed the risks and the bill passed in committee. It will now be considered on the Senate floor.