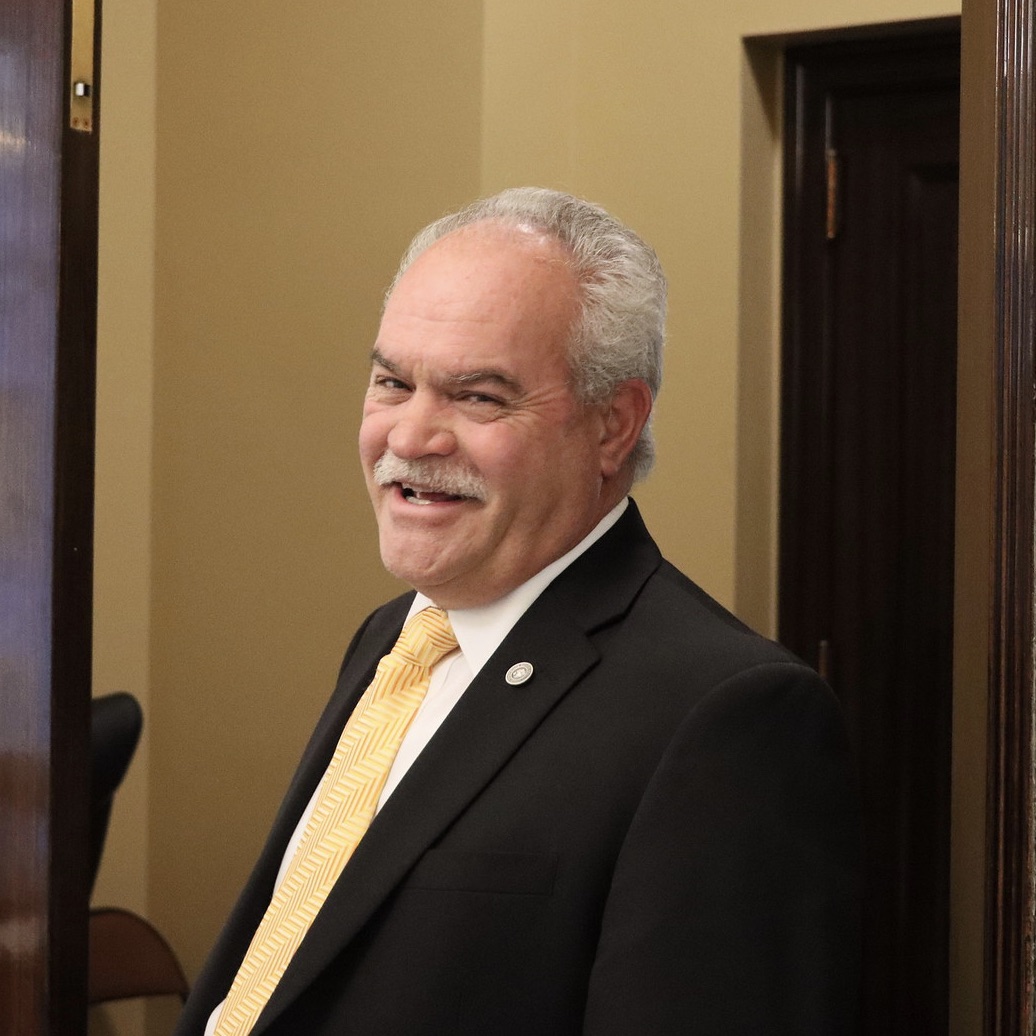 We are just about finished with committee meetings and we’re off to the senate floor for the remainder of this session. There are plenty of House bills making their way to the Senate which makes debate interesting. From distracted driver amendments to rural economic development, we’ve heard it all. Before I delve into bills that we’ve been deliberating, I’d like to elaborate on H.B. 208, Alcohol Education Amendments, a House bill that I sponsored in the Senate.

The effects from drinking alcohol while pregnant can be devastating. This bill will start a campaign to increase awareness of the consequences of alcohol consumption during pregnancy. Unlike some drugs, alcohol can cause permanent and irreversible physical and mental harm to an unborn child for their entire lifetime. Revenue for this project will come from sales taxes on alcohol. An annual report will be given to the Health and Human Services committee, including how funds were used and measurable results. This bill passed in the second reading calendar in the Senate. You can listen to the Senate floor debate here

The budget will also be another critical conversation this week before the session ends to know what will get funded. While we do not have the final budget prepared yet, our Executive Appropriations Chairs have assured us that we will be increasing education funding again this year. Utah legislators consistently prioritize education funding and have increased it from $2.8 billion to $3.8 billion in the past five years. We are expecting to see a 5 percent increase to the Weighted Pupil Unit (WPU) and over $500 million in new money to education.

Below are some significant highlights and bills to look out for:

Education Funding Proposal – Legislation proposing to protect, grow and stabilize K-12 public education funding in Utah while also supporting services for children and individuals with disabilities was discussed this week. S.J.R. 9, Proposal to Amend Utah Constitution - Use of Tax Revenue and H.B. 357, School District Use of Property Tax Revenue would move base budget education funding to a constitutionally protected account for K-12 public education – the Minimum School Program, which includes the weighted pupil unit (WPU).

The proposal would automatically adjust education funding based on enrollment growth and inflation in the base education budget. It would also establish a reserve account to stabilize public education funding during economic downturns.

Under current Utah law, there is no requirement to factor student enrollment growth or inflation into state education funding. This proposal creates a protected base that addresses both issues and is constantly growing. Funding beyond this base will be appropriated through the annual legislative appropriations process. One-time funding will remain available for public education needs when revenue is available.

Although income tax revenue has grown steadily during much of Utah’s economic expansion, it is subject to peaks and troughs. For example, Utah saw a 12 percent income tax revenue spike in 2007, followed by 10 percent and 9 percent downward shifts in 2009 and 2010, respectively.

The proposed legislation allows the use of income tax revenue to support services for children and individuals with disabilities, including social services that supplement educational needs and support students’ physical and mental health.

Utah is one of the fastest-growing states in the country, with a population expected to double in the next 40 years. The Legislature is taking important steps to protect education funding as Utah’s population grows and the economy fluctuates.

The Utah State Board of Education is in favor of the proposal. This proposal is subject to voter approval and will take effect if Utahns approve it during the November 2020 general election. 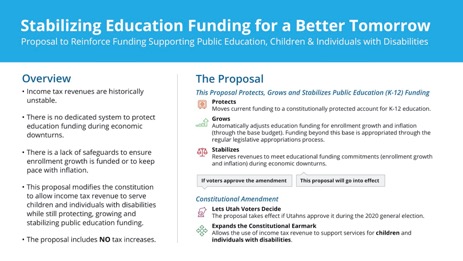 Coronavirus – With the coronavirus (COVID-19) continually making headlines, many Utah citizens are asking about our state preparations. The governor created a task force and activated the Incident Command System to ensure effective communication and coordination. Find updated information and prevention tips about COVID-19 online at coronavirus.utah.gov.

Murdered and Missing Indigenous Women and Girls Task Force – In 2019, the Centers for Disease Control and Prevention (CDCP) reported that murder is the second leading cause of death among Native American women and girls, who are murdered at a rate ten-times higher than the national average. H.B. 116, Murdered and Missing Indigenous Women and Girls Task Force, creates a Utah task force to identify causes of this violence in our tribal communities and develop recommendations for the prevention of the missing and murdered Indigenous women epidemic. This bill passed in both the Senate and House and will be sent to the Governor for his consideration. You can listen to the floor presentation here.

Distracted Driver Amendments – Distracted driving causes thousands of accidents in Utah each year — an estimated 25 percent of all Utah accidents. Hand-held cell phone use while driving has been illegal in Utah since 2007. Since it is not a primary offense, enforcing this law has been difficult. For example, law enforcement cannot pull drivers over for texting while driving on the freeway. As the law currently stands, hand-held cell phone use while driving is only punishable when coupled with another primary traffic violation. H.B. 101, Distracted Driver Amendments, would make holding a cellphone while driving a primary offense. Drivers would still be permitted to communicate on their phones in a hands-free manner, using means such as Bluetooth, cell phone mounting devices or simply resting their phone in a secure spot. Drivers would be allowed to briefly tap or swipe their phones to answer calls or use cell phone assistants like Siri or Google. Exceptions would be allowed during emergencies.

Twenty-two other states have passed similar laws and are seeing declines in motor vehicle accidents. This bill generated considerable debate on the Senate floor, but ultimately passed on the 2nd reading. You can listen to the floor debate here.

E-Cigarettes in Schools – The coordinated effort to reduce the use of e-cigarettes among our youth is greater than ever. H.B. 58, Electronic Cigarettes in Schools Amendments, establishes rules regarding vaping on school property. For example, local education agencies would be required to adopt policies for confiscating and destroying e-cigarette and vaping products when students are found in possession of e-cigarettes and vaping products in school. The harmful effects of vaping would be added to the health curriculum. Students who report feeling socially isolated in school are three times as likely to have vaped in the last thirty days. With this in mind, H.B. 58 will incorporate programs addressing the social and emotional reasons youth turn to vaping and other addictive substances.

This bill passed in the Senate Health and Human Services Committee and will now be considered by the full Senate. 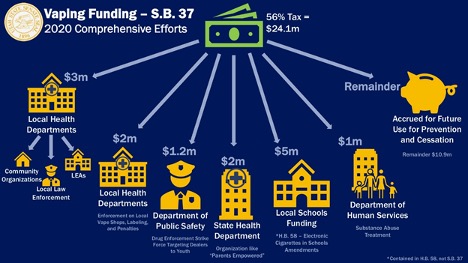 Municipal Regulation of Golf Carts – Under Utah law, driving a golf cart on the road is illegal. H.B. 184, Municipal Regulation of Golf Carts, will give cities and towns the ability to decide whether or not to allow golf carts to drive on a highway. Elk Ridge City Golf Course requested this bill because it is unclear whether or not citizens can drive their golf carts from their homes to the golf course nearby. Golf carts would only be operated on specified highways approved by the relevant municipality. That city or town must provide parameters around which highways a person may operate a golf cart, who may operate a golf cart on that highway, and during what specific hours. In addition, the bill prohibits drinking alcohol while operating a golf cart on a highway. This bill passed in the Senate and the House.

An enormous amount of time and money is invested in educating and training inmates so they can live fruitful and productive lives after their release. During incarceration, many inmates achieve vocational and educational goals that eluded them in their earlier lives. Unfortunately, provisions in Utah law make it impossible to receive or renew professional licenses with a criminal history. For example, an individual incarcerated for driving while intoxicated may be unable to obtain an electrician’s license — despite possessing required skills. S.B. 201 aims to help make it easier for people to make a living after they have paid their debt to society. The bill is designed to reduce recidivism by removing needless barriers.

S.B. 201 passed in the Senate and will now be considered in the House. Listen to the bill presentation on the Senate floor here.

Rural Economic Development – State leaders have talked a lot recently about the strength of Utah’s current economy. Unfortunately, most of our state’s economic success is occurring in urban areas. S.B. 95, Economic Development Amendments, creates grant programs for rural counties to help develop their local economies. The bill uses money from the Utah Science Technology and Research Initiative (USTAR) that was put on hold during the 2019 Legislative Session.

S.B. 95 makes third to sixth-class counties eligible for $200,000 annually if they create community economic development advisory boards. The counties may also access additional funds subject to a matching requirement. The bill passed in the Senate and is now being considered in the House.

Listen to the bill presentation on the Senate floor here.

This bill passed in both the Senate and House. You can listen to the floor presentation here.